THE SECRETS OF MARMA

Marmas are the vital points in the body where the life force energy is concentrated. The Marma points are located where the flesh, veins, arteries, tendons, bones and joints meet. They may also be described as the junctions where Vata, Pitta and Kapha meet; where Sattwa, Rajas and Tamas meet; or where Eternity and Relativity meet.

In the martial art of Kalaripayattu, the warrior is trained to attack particular Marma points in his opponent. It is claimed that an advanced Kalari Master can disable or kill his opponent merely by touching the correct Marma point. However, this is taught only to the most promising and level-headed persons to discourage the misuse of the technique. 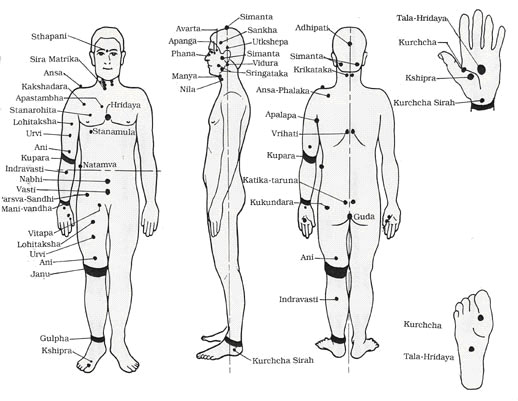 Marma points are grouped according to the region of the body, arms-22 points, legs-22 points (11 per limb), abdomen-3 points, chest – 9 points, back – points, head and neck- 37 points. The marma points are also grouped according to muscles – 10 points, tenders/ligaments – 23 points, arteries – 9 points, veins, joints – 20 points, bones – 8 points. Traditionally marma points are grouped in to 3 categories: those on the legs and feet, (saakha marma), on the trunk (Madhayamanga marma ), neck and head (jatrugdhara marma ).

These marma points are measured in finger units (angula) to detect their correct location. One “angula” is the width of the finger, For example, ‘ani marma’ is a marma point existing just above the knee, four fingers above the middle of the knee. This point relates to the small intestine, and situated on the back of the leg, directly behind this spot. If we move the hands from the front ‘ani marma’ in a straight line to the back, this marma would be stimulated. So working on a marma point affects the front, sides and back of a marma.

The heart, forehead and throat are the most vulnerable areas of the body, whereas the areas on the arms and legs are less vulnerable to severe injury. When imbalances exist in the body, the Marma points become sore, but through Marma Abhyanga therapy, balance can be restored.

The major Marma points in our body correspond to various chakras, while the minor Marma points are found around the torso and the limbs. Thus, healing through Marma Abhyanga affects the chakras and the doshas and also stimulates the various organs and systems of the body.

There is a basic connection between the position of the planets and stars and Marma Abhyanga. It is well know that cosmic rays have an effect on the human body – for instance, the sun is very powerful at noon and the heat radiation is high at this time of the day. Hence, Marma Abhyanga therapy is performed only during morning and evening, not in the afternoon. A good Marma practitioner knows everything about the Marma points, Ayurveda, Kalari Chikilsa and Astrology.

Hi there! Click one of our representatives below and we will get back to you as soon as possible.